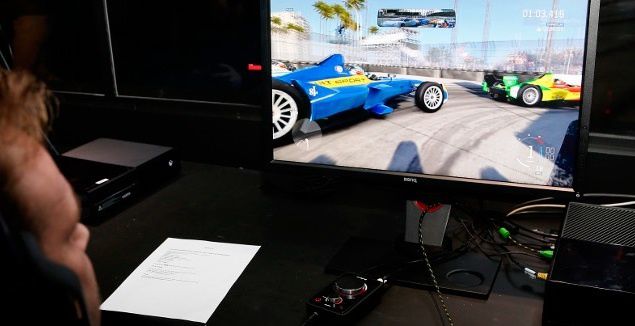 The Dragon Racing driver and the DS Virgin Racing star will use the Formula E cars in Turn 10 Studios’ Forza Motorsport 6 on Xbox One for virtual bragging rights. The event takes place at ESL Studios in Leicester on March 19, and you can be a part of the action too.

Two semi-finals will be used to decide the entry list for the grand final where the successful racers will go up against the actual Formula E drivers. All the action will be broadcast as live by BT Sport that evening. The overall winner will be invited to a special event to be staged later in the year.

To register your interest in taking part in the event, email raceoff@fiaformulae.com

Formula E CEO Alejandro Agag said: “We believe that eSports and Formula E are natural partners and that the next generation of motorsport fans can be found in the virtual world. The Race Off series gives the fans the potential to race against their idols, but this is only the beginning of our plans in this field. Very soon we will be announcing a brand new initiative that will be a world first in this sphere and will demonstrate Formula E’s commitment to bring new fans into the sport and offer an unprecedented level of access and opportunity.”

Jerome D’Ambrosio said: “It’s going to be interesting - racing drivers are always competitive, so we’ll both want to win, but it’s going to be so much fun. Some of the gamers are really, really good and I think that it’s a real challenge for us even being racing drivers. I’m looking forward to sharing a different experience with professional gamers - gaming is getting more and more realistic so it will be interesting to see how it unfolds.”

Sam Bird said: “I used to do an awful lot of simulation with Formula 1 teams like Williams and Mercedes but now my girlfriend’s kids hog the Xbox – I don’t get a look in! These days gaming is huge with millions of people playing, following, streaming and downloading. If we can tap into that it would be amazing for us as a championship. I reckon Jerome has been getting some midnight practice but it’ll be good fun!”

For further information, including hi-res images, visit www.fiaformulae.com/media or contact:

Add us on Snapchat: FIAFormulaE

Formula E is a ground-breaking FIA championship and the world’s first fully-electric racing series. It represents a vision for the future of the motor industry, serving as a framework for research and development around the electric vehicle, accelerating general interest in these cars and promoting sustainability. The first season began in Beijing in September 2014 and completed in London in June 2015, racing in 10 major cities (11 races) around the world. The championship sees nine teams, each with two drivers, going head-to-head to create a unique and exciting racing series designed to appeal to a new generation of motorsport fans. Season two got underway in October in Beijing with the series becoming an ‘open championship’ allowing approved manufacturers to develop new powertrain solutions. Future seasons will see the regulations open up further allowing manufacturers to focus on improving battery technology.

As well as being the official Formula E tyre supplier, Michelin is an official partner, at the international level, of the FIA Action for Road Safety campaign. The programme is designed to support the Decade of Action for Road Safety initiated by the UN, the aim of which is to save five million lives over the next 10 years. This programme is set up to educate and advocate for safer roads, vehicles and behaviours around the globe.

About Forza Motorsport:
Welcoming racing gamers of all types, Forza Motorsport games combine unprecedented visuals with the industry’s leading simulation engine, giving everyone the opportunity to truly feel what it’s like to own, race and customize the cars of their dreams. Forza Motorsport is developed by Microsoft’s award-winning game developer Turn 10 Studios. “Forza Motorsport 6” and “Forza Horizon 2” are available now for Xbox One. More information about the Forza Motorsport franchise is available at www.forzamotorsport.net