Under the High Patronage of H.S.H. Prince Albert II of Monaco Every year a player still in activity is elected through the internet poll, and some of the past greatest legends, who are invited by the promoters will also receive the Legend golden foot award.

The nominees for the Golden Foot award are players still in activity, at least 29 years old. The fan, through the internet poll, elect the one who, among the 10 nominees chosen by the jury, deserve most to receive the prestigious career prize. Even being only among the golden foot nominees means to be considered among the greatest champion still in activity. 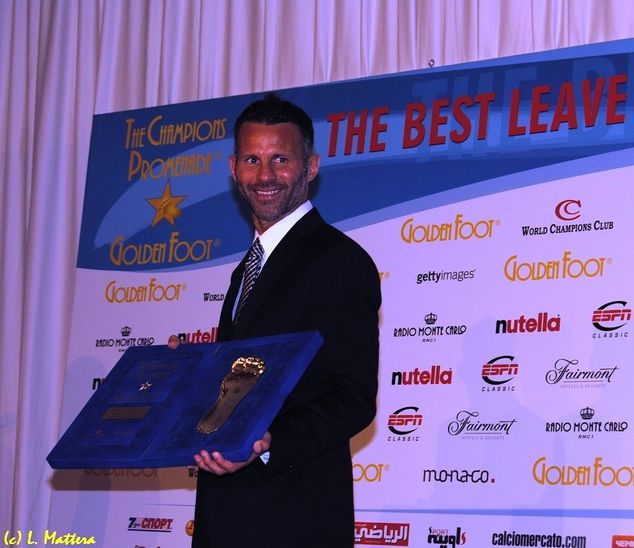 BBC Sports Personality of the Year (2009)

Ryan Giggs is one of very few players to have spent their entire career at the same club, he is the most decorated player in the history of Manchester United FC with more than 800 appearances for the club, Welsh winger Ryan Giggs's main strengths are his speed and his ability to manipulate the ball while running at full pace. Giggs is Manchester United FC's longest-serving current player, having made his first appearance for the club during the 1990-91 season and been a regular player since the 1991-92 season. He has played the highest number of competitive games for the club (more than legendary Bobby Charlton), and he holds the club record of team trophies won by a player. As well as being a fine dribbler, Giggs is also a regular goal scorer: it is very famous a  magnificent solo score to win the 1999 FA Cup semi-final replay against Arsenal FC, from which point the club went on to secure an unprecedented treble of league, cup and UEFA Champions League, later adding the Intercontinental Cup. He has claimed 12 English titles (a record) and he is the only player to win the Professional Footballers Association Young Player of the Year award on two occasions in a row (1992 and 1993). He has played 814 matches for Manchester United FC, more than anyone else. As Welsh international Giggs has been a regular in his side since becoming the youngest player to represent his country aged 17 years and 321 days against Germany in 1991, although he has never played in a final tournament. With his country's shirt, the Welsh Wizard has played 64 games scoring 12 goals, before the announcement of his retirement from international football on 30 May 2007.

- Ryan Giggs is actually the player who played most for Manchester United FC with more than 830 appearances and the most winning.

- Uefa Cup (now Europa League) is the only trophy missing in his career.

- So far, Manchester United FC and Wales are the only two teams he played.

- In the 2010/11 Champions League he has become the oldest player in Manchester United FC history to play a European semifinal.