Skill, scope and agility are three very important components that mark the world’s best show jumping combinations.  It took all of this and more to win the Global Champions Tour Grand Prix of Monaco. And Rolf-Goran Bengtsson was the only one of the 48 starters to jump double clean rounds to win his second Global Champions Tour event this season. He took home the cheque for 92,000 euros and his second Jaeger-LeCoultre Reverso watch. 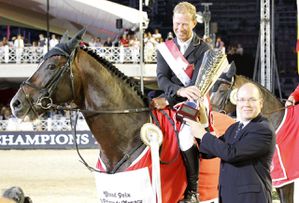 Precision riding over a very technical track saw Rolf produce two perfectly executed rounds with the same stallion that he won the Global Champions Tour Grand Prix of Germany. Rolf remains one of the most compelling forces in the game: World Champion, Olympian and Silver medallist at the Beijing Olympic Games.  He now adds two GCT wins to his statistics portfolio.

There was no shortage of stiff competition in the Grand Prix as the world’s best riders and horses faced German course designer Frank Rothenberger for the fourth time this season. Frank has built four of the five rounds of the Global Champions Tour this season, yet every arena presents a different palate and set of circumstances.

Monaco arena is small with very little room for adjustability on course and Rothenberger’s track was big and technical.

Twelve clear rounds, one on a time fault and five on four faults made up the 18 who went through to the second round.

Of those, one would have predicted that three or four would go through to jump-off.  However it proved a very difficult challenge for some.  Lauren Hough, first to go with Quick Study was eliminated with two refusals, Billy Twomey(IRL) retired with Tinka’s Serenade Meredith and Shutterfly had a misunderstanding at the Eurosport vertical causing a sudden stop and further rails put them out of contention. Ludger Beerbaum, who was leading the GCT ranking after the Cannes leg, had three fences down.

The pressure was turned up in the competition as the heavily packed stands watched the clear show jumping rounds multiply for Rolf-Goran Bengtsson and Casall La Silla. No other combinations could match this and he was deemed the winner of the Global Champions Tour Grand Prix of Monaco.

German Christian Ahlmann came the closest with just one time fault on Taloubet Z.  Adding a stride between the Massimo Dutti fence and the Global Champions Tour oxer left him fractionally over the time but good enough for second place.

Rodrigo Pessoa (BRA) carried four faults from the first round jumped clean in the second and placed third as the fastest combination on four penalties.

The GCT leaderboard has once again changed with Australian Edwina Alexander moving ahead of Ludger.  Edwina concluded the two rounds with 4 faults that eventually placed her on time into seventh place in the Grand Prix.  She now stands with 155.00 ranking points, a little ahead of Ludger who has 151.50.

It has been a good weekend for Edwina with a second place in a 1.45 event with Cevo Socrates and she also won the title of the first rider to earn a million euros from the GCT series since 2006.

The Global Champions Tour heads to Estoril in Portugal next weekend. Rolf Göran Bengtsson, who came second at the Olympics, overcame all the obstacles with great ease to achieve an impressive faultless double. “My stallion Casall La Silla has always performed brilliantly, be it on the grass at Hamburg or the small course here at Monaco. He’s fantastic. In fact, the son of Caretino, he’s been a favourite with breeders. I am overjoyed this evening having not dared to hope for two GCT victories, especially as I am now the proud owner of another Jaeger-Lecoultre watch,” Rolf declares with a big smile.

Speaking after the Grand Prix

I am very pleased with the way the Global Champions Tour has run all week.  The crowd was great and the ambiance very good.

The Pro-Am Team event was very exciting and the people enthusiastic.

There was a great ambience and the new concept of team jumping went really well and people warmed to the teams.

On the unexpected single clear round, which meant, no jump off, Mr Tops said: “I would not expect to have no jump off at all because in the first round we had 12 clears. But overall I am very happy with the way everything has gone here in Monaco.” Charlotte Casiraghi, honorary president of the Monaco Horse Show and creator of the hugely popular Pro-Am Cup class, said at the press conference:  “I think the Pro-Am was a great success last night and I am very happy that all the sponsors were excited about this new concept.

“Also the Grand Prix was great sport tonight and I am also happy because my own horses jumped very well.”

Edwina Alexander spoke about her delight at jumping to the top of the Global Champions Tour rankings.

Asked if she had a special plan for holding on to the top spot Edwina said: “I hope I do but there are so many things that can happen between now and the rest of the competition, so let’s just try our best and hope to stay up there.”

And there was high praise for GCT’s spectacular three-day event in Monaco from lead GCT partner Jaeger-LeCoultre.

Isabelle Gervais, the luxury Swiss watch-maker’s International Director of PR, said: “Jaeger Le-Coultre is very proud to be part of this and to share in this exceptional show.

“It is great to enjoy the sport and the evening itself.”

The Global Champions Tour ranking is updated after each leg of the tour based on the scores derived from the rider’s performances.